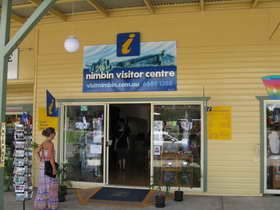 Nimbin exploded on Australia's psyche in the 1970's when it hosted the Aquarius Music Festival.

After the bands left and the dust cleared, a few intrepid souls stayed on and made their mark on the formerly sleepy rural village.

The unofficial capital of the "Rainbow Region" and Australia's alternative lifestyle capital, old shopfronts have been converted to eateries and retail shops are gaily decorated in indigenous and new age motifs.

See Getting Here and Getting Around for more details.

Accommodation in Nimbin and nearby

Book direct via Booking.com or choose from the links below 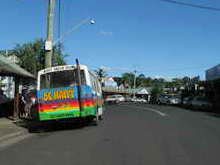 Accommodation has grown to include caravan parks, B&Bs, motel, backpackers and a pub, with a growing farmstay and cottage presence scattered in the hamlets around the village.

A number of day tour operators from Byron Bay and the Gold Coast, include a Nimbin visit in their day tours.

The vision of Aquarius is still alive and kicking with the likes of the the Rainbow Power Company and Jarlanbah Permaulture Hamlet, providing an insight into and working examples of alternative roots and potential futures.

No visit to Nimbin would be complete without a visit to the Nimbin HEMP Embassy.  Started in 1992, the HEMP Embassy runs an information centre/ paraphernalia shop to fund their campaigns to reform outdated industrial, medicinal and recreational use cannabis laws.

The Nimbin MardiGrass, established out of a protest in 1993, is now a popular annual event focussed on hemp and drug law reform, which inevitably generates some heated discussion.

And the local free monthly newspaper The Nimbin Good Times, is an excellent source of local news, information and events, and is well worth a read.

Look out for the Nimbin Rocks, particularly beautiful in the early morning sunlight, about 3 kilometres south of town.

Nimbin also provides convenient access to Nightcap National Park, now one of the five World Heritage sites in the region.

Mount Nardi picnic area offers a starting point for walks of varius lengths, or you can just enjoy a picnic and the views.

However, if you want to visit Terania Creek and Protester Falls, the scene of protests to have the then state forest old growth stands protected from logging, you'll need to detour via The Channon.

Spectacular views looking out over the Tweed Valley and Mount Warning to the east, accessed by easy walks through Cool temperate or Subtropical rainforest, is a feature of this spectacular World Heritage area.

The 64km Tweed Range Scenic loop Drive can be reached via the Barkers Vale turn off on the Murwillumbah - Kyogle Road, just northwest of Nimbin.

Take a packed lunch and then decide which views to enjoy, at Bar Mountain, Blackbutts Lookout or Antarctic Beech day use picnic areas.

Getting to the region is easy: Nimbin is approximately 811 kilometres - about 10 hours drive north from Sydney via Lismore, and about 2 hours drive south from Brisbane, via the Pacific Highway. 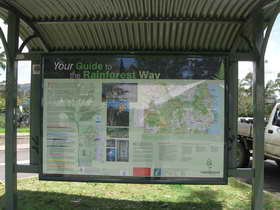 Domestic flights to and from Sydney and Brisbane, along with regional intrastate flights are available to Lismore Airport, with regional air carrier REX Airlines.

Domestic flights operate from east coast capital cities into Ballina/Byron Gateway Airport, and from all capitals and a number of regional airports, into Gold Coast Airport at Coolangatta.

A number of international carriers servicing SE Asia, New Zealand and the Pacific also fly into Gold Coast Airport, with all airports having airport car hire or other car rental services available nearby.

Daily interstate coach services are available for Lismore to Brisbane and Sydney, with a daily or overnight train service available via coach transfer at Casino.  See Countrylink services for timetables and more information.

Northern Rivers Carpool  provides locals and visitors with the opportunity to share transport in the region.